175th Street and Broadway’s very own, Jose Spacely, has always had a clear vision for the mark he wants to leave on the world. At only 8 years old he began to make his own mixes using a CD burner in his Washington Heights apartment. He made mixes consisting of every song he likes, ranging from rap to jazz. His diverse taste in music opens up his mind which allows him to use his platform effectively.

He’s a Fool With Perspective– his podcast consists of great conversations about music, trends, and the “fast life.”

From the past, the come up, and the future.

He launched the Space Bound podcast alongside his friend, @LastNameBall, who started with him and often helped him out.

As an undergrad at LaGuardia & a Washington Heights native, he relates to those from the local neighborhood while also obtaining a college degree. At 16, he wanted to start his own podcast, but never had the chance to due to lack of money and his heavy focus on school.

“This was supposed to happen 6 years ago, now everybody got a podcast.”

For those who have a lot to talk about, a podcast is a great platform as it is uncensored and you can make anything out of it.

“You could do whatever you want, you just gotta know how to handle it; take advantage of your opportunity.”

His greatest podcast influences consist of TaxStone, Cipha Sounds and Peter Rosenberg. He became acquainted with their work during his sophomore year of high school and was impressed to see artists like Jay-Z being interviewed. “You always wanna know what your favorite artist is doing,” he says.

Other influences consist of Nas, Roc A Fella, Ruff Ryders, Dipset, Smack DVD, and Kenny G. The art of music and expressing yourself is something he holds very dear to his heart. He often expresses how he can listen to anything from rap to jazz and soul…and dembow on the side during family baby showers (Shoutout to the Dominican Republic!)

The streets often play a large role in music influence- your neighborhood itself teaches you how to move accordingly and who to trust. Luckily enough, we have people like Spacely who keep the unity and positivity alive.

Spacely’s mother came to the United States from the Dominican Republic in 1994 and worked extremely hard to give him a life of opportunity. It’s clear he’s taken those opportunities in order to grow while still carrying the Heights on his back everywhere he goes and with whatever he does.

“The streets teach you how to watch your back, the music reminds you.” 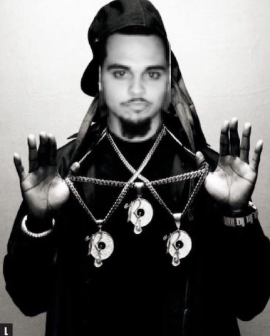 Spacely wants everyone to recognize he has a lot to talk about, and that’s that. “We live in an opinionated world, everyone’s opinions are very interesting,” he says. He’s simply inspired to get on the mic by just stepping out of his apartment. Inspiration can be found by seeing the world for what it is- raw.

For those trying to start a podcast, Spacely has a few pointers for you:

Make sure to check out the links to his podcast: