As Women’s History Month reaches its culmination, we were able to see some the amazing ways women were commemorated for their roles in our lives, their work and their struggles that turned into achievements. Whether it’s your mother or a female figure that has left a mark on your being, it’s safe to say women are the powerhouses we need to make life make sense.

Owner and personal trainer at His and Hers Boot Camp New York since 2015, Brandon Matthews launched his first boot camp for International Women’s Day (IWD) on March 9th, 2016. Considering it’s his largest event as part of HHBCNY, his goal is to honor the greatness of women through fitness. Since the inception of his IWD boot camps, the amount of attendees have grown exponentially every year. In 2016, he had seven women in attendance. In 2017, 44 participants attended the event. 2018 resulted in 84 participants. A whopping 144 attended this year’s International Women’s Day Boot Camp. The hashtag #IWD4 was used to promote the event all over social media channels which greatly contributed to the event’s success.

Most attendees are either current, previous and even future clients of HHBCNY. The studio is described as unique, challenging and fun. Brandon’s priority is to push his clients beyond their limits so they can grow confidence and achieve their desired goals. He offers common workouts combined with athletic training methods and upbeat music to create a unique and fun workout. His classes take place up to seven times a week, some in the morning and some in the evening to offer flexibility for everyone’s personal schedule- book here. One thing that makes his classes stand out from others is the amount of teamwork his clients indulge in. HHBCNY’s private setting and welcoming environment has created a safe haven for all clients. His zero-tolerance policy for disrespect is very well alive making His and Hers a comfortable environment for all people regardless of color, gender or creed. 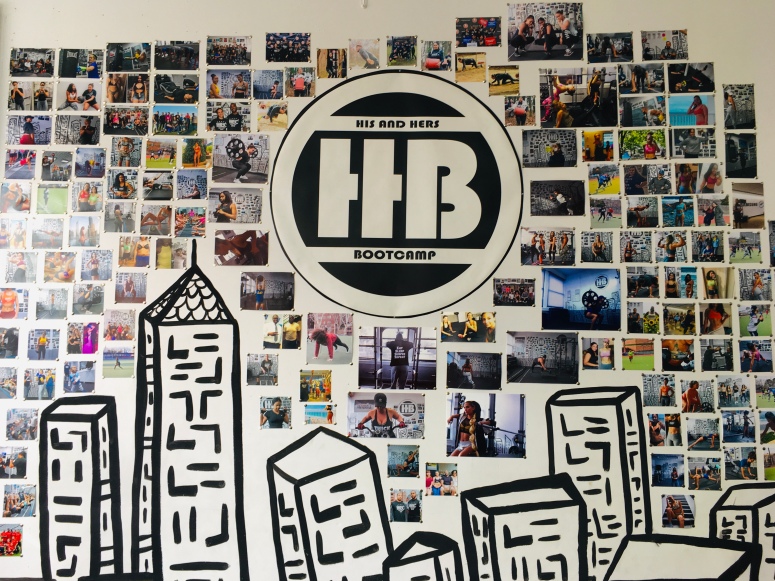 Q: What was the greatest motivating factor for you to create HHBCNY?

A: To create a space where people can workout freely and not be judged. Although that sounds very typical of a gym, it’s a little different when it’s on a personal level. Especially with most of my clientele being women, there are just too many things that they go through that I will never understand as a man. But, as a man, I need to do my part and provide something safe with my business for women and men, and in general. It’s kind of turned into a women’s empowerment movement. It was just supposed to be somewhere to have my training sessions and train the way I like to train. It’s definitely turned into a safe haven for many people, especially women.

Q: What sets you apart from other personal trainers?

A: I don’t think too many things set me apart from other personal trainers- they all put their work into their craft just like I have. Determining a good or bad personal trainer will always come from the client themselves whether it’s their results or their relationship, or lack thereof. I like to work in a detailed manner but I still try to distance myself. I will make sure you’re doing something right, I will teach you what needs to be done for the particular goal or exercise but that does not mean I need to hover over you. That also doesn’t mean I need to be on top of you- figuratively and physically. I want you to learn how to do things on your own. Clientele eventually leave their trainers- it’s just life and it’s not personal. My main goal is for when that day comes, whether it’s in a week or in a couple of years, you take what I taught you and apply it to your next fitness journey or your next trainer.

Q: What is your top fitness tip?

A: Don’t believe fads. Technology has advanced in life and we now have more knowledge and more access to things. At the end of day, fitness is subjective to oneself. There is no way a person is supposed to look, there is no way a person is supposed to feel, so to speak. Some people are strong, some people are not. Some people have an amazing amount of endurance and stamina, some people do not. That doesn’t mean that either of those people are in shape or not in shape. Your book of fitness is not someone else’s book of fitness. Do not compare the two.

Q: If a client was training with you for a few months and they felt they didn’t see much difference, how would you approach that?

A: I would ask them if they did or did not see any results or see the results that they were looking for. If it was the results that they weren’t looking for, I would try to find some pros first and ask them if they saw results in that manner. Depending on what their answer is, I will go from there and remind them of their goal and the plan. If we reach the end of a program and they’re not satisfied, I didn’t do my part or something wasn’t clear, there will be, on a business side, an attempt to retain a customer and start from scratch or start over with the particular program. You always want to try to keep a customer- it’s not always expected to be 100% satisfied when you get a new product. When it comes to the body, this particular industry is not only to rely on the trainer. I can only do what a trainer is supposed to do while we’re together for however long that is. What you do outside of here, also affects that. Even if the trainer did everything correct but you did not, that’s going to affect your results. If you’re trying to lose 10-15 pounds but you’re eating junk food every 3 hours, I can give you the workout of a lifetime but if you’re not eating correctly, you’re not going to see those results and naturally, the trainer may be blamed. But in reality, it is a team effort.

Q: What is the most rewarding part of your job?

A: Seeing my clients happy. My clients don’t all have the same goals. I have women that want bigger butts, I have women who want to lose 20 pounds, I have women that want to gain 20 pounds. So many different goals are presented to me with my clientele, and I am happy to be a part of it. There isn’t anything better in this industry when you see a client do something that they believed they couldn’t. Once that progression starts to happen- whether it’s lifting something, weighing a certain amount, or looking a certain way… seeing their face and seeing how happy they are makes them want to keep going. It’s like a validation for them. “Wow, it’s actually working. The patience paid off, the hard work paid off.”

Q: Why do you feel like most of your clientele is women?

A: When it comes to personal trainers, there’s no hiding the stigma that a lot of personal trainers take advantage of their clientele. Women have to deal with that on a regular basis as soon as they wake up and step outside of their house. Due to the way I was raised and my high school experience with my football coaches, women in athletics are no strangers to that. Seeing women in athletic clothing- leggings, shorts, sports bras…I’ve been accustomed to that since I was 13. My coaches would always stress to me that [she] is putting the same amount of work for her craft, and I need to respect that. That was drilled into me and my teammates. It wasn’t “Hey, don’t live,” and of course we can be attracted to women but in the same breath it’s, “Leave her alone, let her do her thing. The same way you don’t want to be disturbed, she doesn’t want to be disturbed. The same way you don’t want anyone bothering you, she doesn’t want anyone bothering her.” People often get confused with the name “His and Hers” because it looks like “hers” a lot. In a simple answer, I’m not a creep and I do respect women. You gotta learn how to respect people. Just because a woman is beautiful doesn’t give you the right to do anything. Even looking can be disrespectful to an extent. I think a lot women are comfortable with the space, not even just me. The privacy is one thing, on top of the product itself. I don’t think it’s because of the lack of men in here because even when the men do come in, I have yet to hear anyone complain to me about feeling uncomfortable or a guy doing something that they should not have. 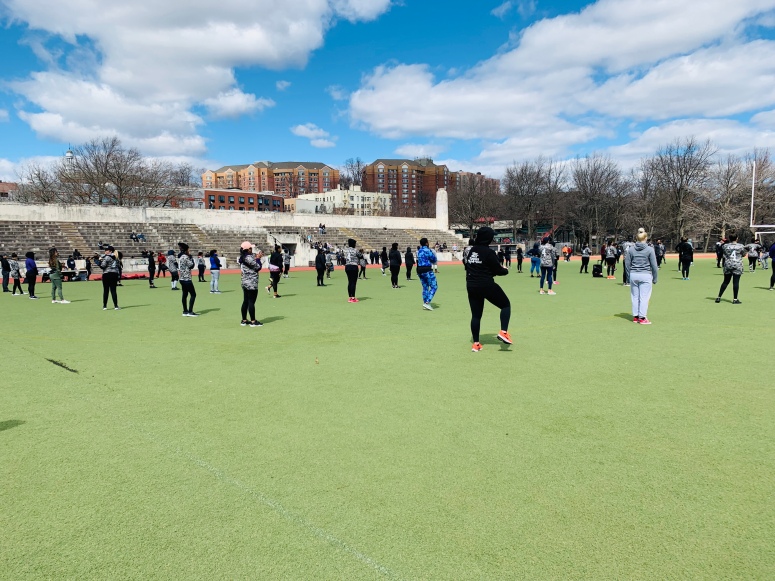 Q: Considering that you expected a large amount of people for IWD4, did that make your planning of the workouts more challenging or were you ready to make it work for any given amount of people that showed up?

A: I was ready to make it work. The workout has been planned for a couple of months. Just going off of the amount of people I had last year for IWD3, I expected there to be a bigger amount- that’s just the goal of anything. I didn’t necessarily change the plan as more and more attendees started signing up, I was more concerned about everything going in order, everything staying according to the plan, just because I did prep for it. Only thing I had to adjust were some of time limits on certain exercises because I noticed a lot of people were getting tired. Since it was more people than last year, I wanted to make sure everyone got more time to do things. The amount of people didn’t change anything because I was fully prepared. I had great help during the event; even the participants were help as most of them are my clientele who attend the bootcamps frequently. They know how I do things and what I would expect. I try to bring my football background into it by appointing leaders, not by finger pointing but by saying, “You know you’re up there, you’re gonna be the leader of the group.”

Q: How do you hope to expand next year’s International Women’s Day event?

A: If the projections remain the same from IWD1, 2 and 3, I would be expecting over 300 people. I need to have a venue to hold over 300 people and I definitely want to keep it uptown. I believe that uptown is missing a lot of family when it comes to fitness. Downtown has that and we [uptown] don’t. I’m not the only organization that is trying to keep fitness in uptown. There are a few trainers that I know and organizations that have the same goals as I. I want to hit different parts of uptown as I’m pretty sure IWD will stay somewhere in the South Bronx, even the northern Bronx or Harlem. I would like some sponsorship as well. It’s not an issue as far as wanting to pay for something we want. The goal is to expand in business and to be recognized as someone who’s worth it where another brand will want to contribute. I want to work with the Yankees, the Knicks and the Giants. I’m a huge sports guy- particularly a football guy, first and foremost. IWD is going to grow.

Make sure to follow His and Hers Boot Camp New York on social media!